Where: Weizmann Institute of Science
When: Published September 1, 2022, in Cell

This clinical trial investigated four of the most widely consumed sugar substitutes—saccharin, sucralose, aspartame, and stevia—and their effects on metabolic health and the microbiome. In short, the human body doesn’t just ignore these sweeteners. Saccharin and sucralose led to spikes in blood glucose levels, and all four sugar substitutes were linked to changes in the gut microbiome. Researchers transplanted the human participant microbiomes into mice and observed the same effects, demonstrating that the microbiome mediated the glycemic response.

A popular strategy to avoid the glucose spikes and weight gain that come with sugar consumption is to replace the real thing with an artificial sweetener. Sugar alternatives like saccharin (Sweet’n Low), sucralose (Splenda), aspartame (NutraSweet, Equal), and stevia provide the sweet taste we crave without the added calories. Due to the lack of calories, scientists initially assumed that such substances are “metabolically inert” or have no effect on the body’s metabolism.

But recent research suggests that there’s more to the story. Studies from the last decade have found that artificial sweeteners may negatively influence insulin and glucose responses, as well as increase one’s risk for obesity, diabetes, metabolic syndrome, and cardiovascular disease. Others, however, appear to support using artificial sweeteners or fail to find the same detrimental effects.

One possible reason behind the conflicting results is that clinical trials up to this point have not considered the role of the gut microbiome. However, past non-clinical-trial experiments point to a link between sugar alternatives and the vast community of bacteria that inhabit our bodies. For example, a 2014 study published in Nature uncovered compelling evidence that artificial sweeteners may contribute to obesity and other medical conditions by altering the composition and function of gut bacteria.

When the researchers added saccharin, sucralose, or aspartame to the diets of mice, their blood glucose increased to levels beyond those that ate actual sugar. But after clearing out their gut bacteria with antibiotics, the glucose intolerance disappeared. A second part of the study put seven people without diabetes on a weeklong regimen with a high daily saccharin intake. Half of the subjects had elevated blood glucose levels after only four days, and testing revealed that the composition of their gut microbiome had changed.

Now, the same laboratory has performed a multi-arm randomized-controlled trial that builds upon their previous work. The current study, published in Cell, aims to assess the effects of four sugar substitutes on human metabolic health and the microbiome.

“[Sugar substitutes] are used by billions of people worldwide to generate sweetness with the hope that we would not have to pay the caloric price of sugar,” said study author Eran Elinav. “But we do not know if these compounds impact our gut microbes, and through them, affect our body and health.”

Elinav and his colleagues randomly split a total of 120 participants, who don’t usually eat sugar substitutes of any kind, into six groups of 20. Members of four groups consumed two commercial packets of sweetener — either aspartame, saccharin, sucralose, or stevia — three times a day. While six packets a day may seem like a lot of sweetener, for each of these, the tested amount was less than what the U.S. Food and Drug Administration considers the “acceptable daily intake” (ADI). A fifth group consumed only a filler used in these packets, while the sixth served as a control with no intervention.

For the first week, none of the participants consumed the sweeteners so that the researchers could collect baseline measurements of metabolic, metabolomic, and microbial parameters. Then, everybody but the control group supplemented their diet with either a sugar substitute or filler for two weeks, followed by another week of follow-up measurements.

The study’s primary outcome, or main goal, was to observe blood glucose levels measured during glucose tolerance tests using a continuous glucose monitor (CGM). Glucose tolerance tests, in which the subject consumes a fixed load of glucose (in this case, 50 grams after a night of fasting), can identify abnormalities in how a person’s body handles glucose after eating. The study also had several secondary outcomes, including microbiome readouts in stool and oral samples, along with physical measurements like body mass index, blood pressure, and hemoglobin A1c. They also tested insulin, though not in a fasted state, which can affect readings.

Overall, the groups that consumed saccharin and sucralose—but not those that consumed aspartame or stevia—had a small but statistically significant elevated glycemic response compared to the filler and control groups, even in this short testing period. In other words, saccharin and sucralose appear to impair glucose tolerance in people without diabetes. The researchers observed no effect on glucose tolerance for the filler or control groups.

“The glycemic responses induced by saccharin and sucralose were highly statistically significant, proving the major point that sweeteners are not inert to the human body or to its microbiome,” said Elinav.

“To our utter surprise, our results strongly suggest that the gut microbes and the molecules they secrete were altered in all four [sugar alternatives] consumers as groups, each in its unique way,” said Elinav. “These changes did not occur in the control groups.”

Next, Elinav and his colleagues wanted to make a direct connection between these changes seen in the microbiome and the glycemic responses they witnessed earlier. To establish causality, they moved away from group analysis and began focusing on individuals, using a method called fecal transplant. After transplanting the microbiomes of 42 participants more or less reactive to sweeteners—seven from each group—into germ-free mice, the researchers performed glucose tolerance tests on the animals. They found that the mice’s glycemic responses mirrored those of their human donors, suggesting the changes in microbiome mediating the differences in response to sweeteners.

This clinical trial is the first to causally assess the possible effects of sugar alternatives on the microbiome and glycemic responses in humans. The results strongly suggest that sugar substitutes are not inert to the human body or gut microbiome. Also, the study demonstrates that microbiome responses to sugar substitutes are highly personalized and may lead to glycemic alterations in some, but not all, people. The reactions seem to depend on their microbial composition and the type of sweetener they consume.

While none of the subjects developed clinical symptoms during the two-week intervention, the microbiome and metabolite profiles changed for all consumers of sweeteners, even ones that did not induce an elevated glycemic response.

A two-week intervention is a blink of the eye compared to a long-term habit. That changes in glycemic response and microbiome happen very rapidly and appear to be changes for the worse, it is possible that habitual consumption of these artificial sweeteners could create a cumulative negative impact, as suggested by studies on weight gain over time. Interestingly, this study did not look at allulose, which has gained popularity recently for seeming to avoid impact on glucose and insulin response, and its potential association with positive effects on the microbiome.

Overall, more work is needed to understand why some people are more responsive than others to these compounds and how impacts vary with dose, timing, and duration of consumption. However, it’s likely wise to exercise caution in regularly eating any food substitute and training the palate away from sweet cravings over time. 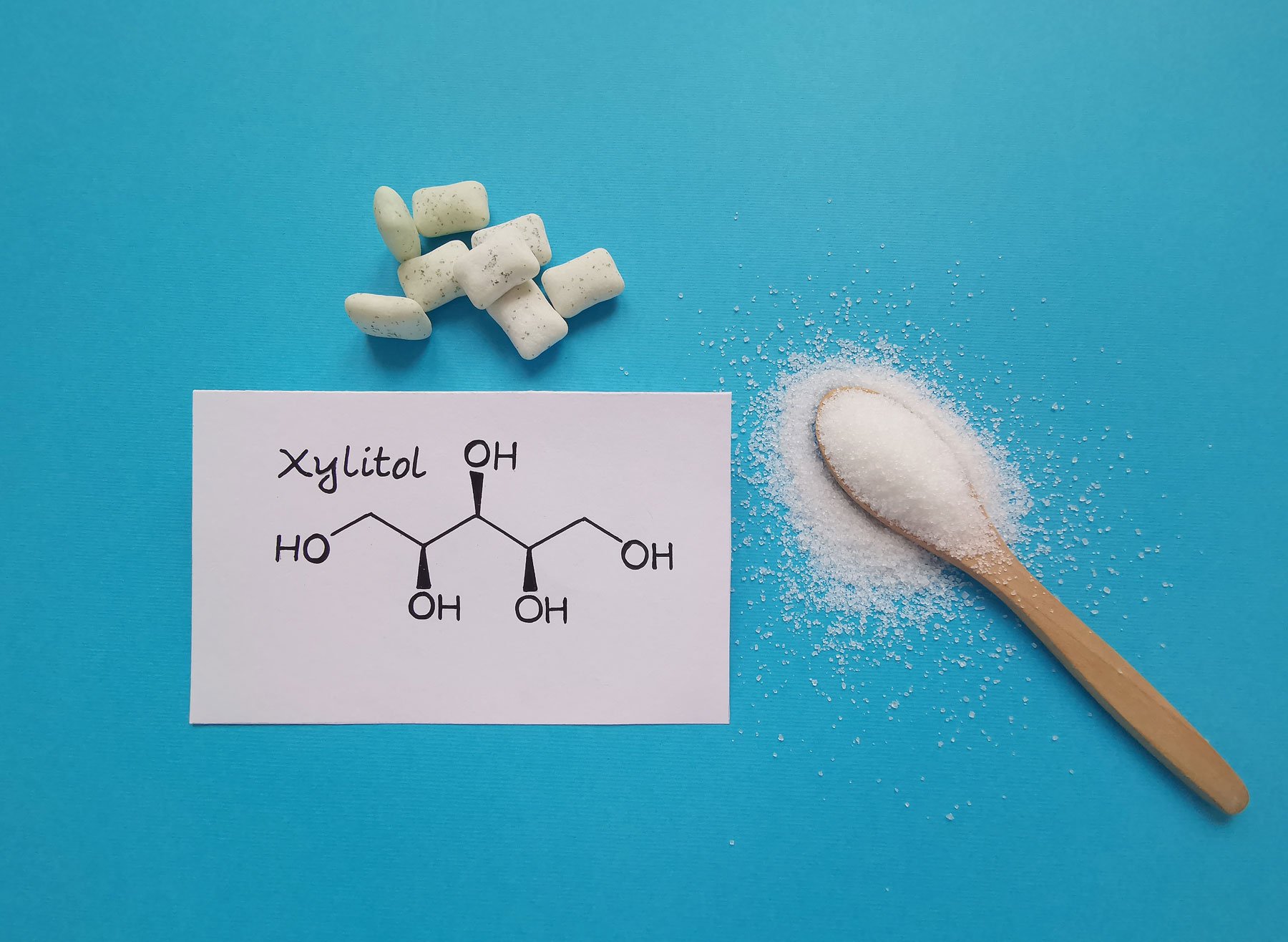 With this brownie recipe you can satisfy your chocolate craving and give your body nutrients it needs—without causing a large glucose spike. Renowned heart surgeon Dr. Steven Gundry on the power of food, the truth about keto, and mitochondrial uncoupling.